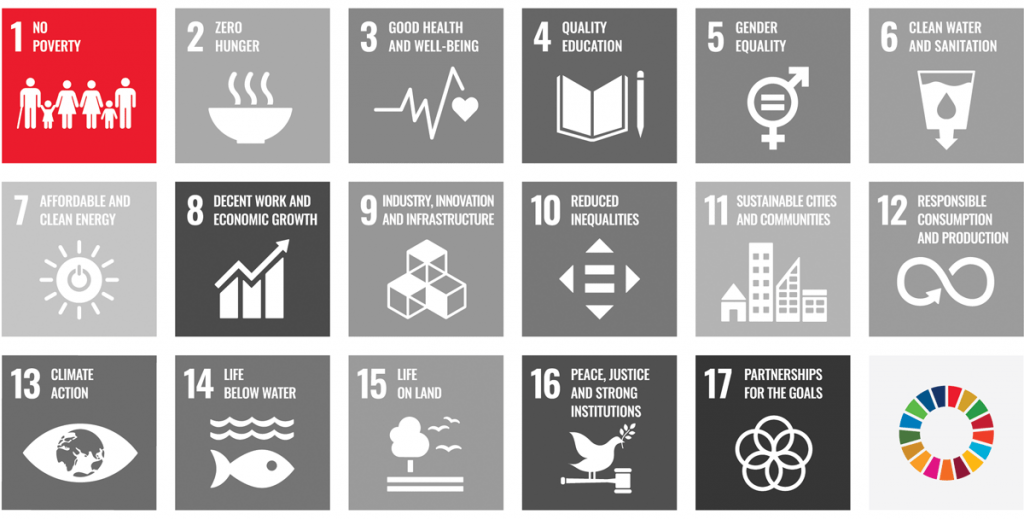 How is poverty connected to sustainability? How does one affect the other? Why is it important and relative to all, not just those experiencing poverty? The issue is a multifaceted relationship that requires us to look at the structural economic, environmental, and social causes and impact of each.

According to the United States (U.S.) Census Bureau, the poverty rate in the U.S. in 2019 was 10.5 percent, the lowest it’s been since 1959. However, the impact of COVID-19 has brought the sharpest rise in the U.S. poverty rate since the 1960s, bringing the rate to 11.8 percent in December. As Bloomberg reports, “This means an additional 8 million people nationwide are now considered poor. Moreover, the poverty rate for Black Americans is estimated to have jumped by 5.4 percentage points, or by 2.4 million individuals.”

So how can increasing and refining sustainability efforts help to support equality and end poverty in our community and the world?

It is much harder for those living in poverty to afford be “sustainable” on their own. They have less access to sustainable resources, proper education about these issues, and power to make real changes on a large scale. These populations are also often adversely affected by economic and environmental inequities, making it harder to recover financially. Why should we expect individuals living in our poorest neighborhoods to make sustainability a priority when they are struggling to even provide for their families?

To support the poorest and most vulnerable, the UN has issued a framework for the immediate socio-economic response to COVID-19 (PDF), calling for an extraordinary scale-up of international support and political commitment to ensure that people everywhere have access to essential services and social protection. The report connects poverty to sustainability solutions stating:

This socio-economic package of support recognizes that the response to this pandemic must accelerate rather than undermine decarbonization, protect the natural capital, build resilient cities, and ensure social equality, inclusion, and the realization of human rights for everyone, the rule of law and accountable, capable governments and institutions.

If we want to move toward a better, smarter, more sustainable world for all, we need to help improve quality of life for even our most vulnerable people — those facing poverty — here in Western Pennsylvania and beyond. While there are many organizations and agencies in our own community putting in the work to fight poverty and many working to increase sustainability efforts, they are unfortunately treating the symptoms of a much larger disease.

To truly address issues of poverty, we need to consider many of the systemic problems that we face as a country, including racial and gender inequities, disproportionate concentrations of wealth, understanding what it means to earn a living wage, and the narratives that define what constitutes poverty.

Prior to the impact of COVID-19, the U.S. Census Bureau, reported that the percentage of persons in poverty in Allegheny County was 10.8 percent in 2019, while the poverty rate for Pittsburgh was nearly double at 20.5 percent. In alarming comparisons provided in the 2019 report, Pittsburgh’s Inequality Across Gender and Race (PDF), “Pittsburgh’s Black adult women are 5 times more likely to live in poverty than White adult men.” Its national comparison adds that Black women in 85 percent of U.S. cities are doing better than Black women in Pittsburgh.

Income disparities in the United States, are now the greatest since the advent of the great depression. Congressional Budget Office data indicate that the top 1 percent earns 85 times as much as the bottom 20 percent. From 1968 to 2018, the top 1 percent of American earners have nearly doubled their share of national income, while the poverty rate for all U.S. families has fluctuated slightly, remaining basically the same.

Pittsburgh is made up of many diverse neighborhoods — including populations of varying age groups, races and ethnicities, and income levels. It’s part of what makes Pittsburgh one of the most livable cities in the world. However, the disparities in income security between these neighborhoods shockingly indicate that our city has significant poverty and equity issues.

In a 2019 Public Source blog, The Pittsburgh Neighborhood Project’s creator, Nick Cotter, reveals, “About 14% of poor White people in Pittsburgh lived in high-poverty neighborhoods (those with 30% poverty or more), but a staggering 59% of poor Black people did, according to an analysis I completed using data from 2017 American Community Survey estimates.”

The $7.25 federal minimum wage has not changed since 2009, and the minimum wage for tipped workers has remained at $2.13 per hour since 1991. In the 2015 article, “7 Most Dangerous Myths About A $15 Minimum Wage,” Forbes Magazine reminds us that when President Franklin D. Roosevelt established the first minimum wage in 1938, “(He) intended this rate to be ‘more than a bare subsistence level.’ The minimum wage was created expressly to ensure that people of all skill-levels, if they worked, could ‘earn a decent living’ off those wages — thus, a living wage.”

As sobering as the poverty statistics are, there are many who argue that the poverty level in the United States is set too low. PolicyLink, a national research and action institute advancing racial and economic equity, believes that “looking at the population below 200 percent of poverty provides a more accurate picture of economic insecurity in the United States.” In 2019, the U.S. Census Bureau reported that this included over 85 million people, or 26.3 percent of all Americans; nearly 60 million of whom were White.

Finally, for those who believe we do not have a poverty crisis in the United States, consider this: American is the 11th richest country in the world, per capita. However, the Children’s Defense Fund’s The State of America’s Children 2020: Child Poverty reports, “1 out 6 American children lives in poverty — making them the poorest age group in the country.”

Whether we are talking about poverty around the world, in the United States, or in the Pittsburgh region, some might ask why we should care about other people’s economic situation? In noting that as human beings, our wellbeing is linked to each other, the UN “No Poverty” goal (PDF) addresses this question by saying, “Growing inequality is detrimental to economic growth and undermines social cohesion, increasing political and social tensions and, in some circumstances, driving instability and conflicts.” In other words, it impacts us all.

In his book, Sustainability by Design, John Ehrenfeld defines sustainability as “the possibility that humans and other life will flourish on the Earth forever.” When so many of America’s youth are living in poverty, how will they flourish without all of us addressing the UN Sustainable Development Goals? “No Poverty” is a crucial place to start.