The fifth UN SDG is to achieve gender equality and empower all women and girls. This goal is imperative in the progress toward many of the other SDGs and lays the foundation for a healthy, sustainable, and thriving society.

We recently talked to Rebecca Geiger, assistant director of the Penn State Gender Equity Center, to better understand this topic and how we all might be able to play a part in achieving this goal.

What does it mean/what would it look like to fully achieve gender equality? At Penn State, in the U.S., around the world?

On basic level, we can consider gender equality to be as simple as removing barriers for women, promoting equality of men and women, with equal access to larger resources, rights, and opportunities within society, whether that be within the University at Penn State, or within our country or other countries and societies around the world.

But I encourage people to consider the definition of gender equity more broadly. The United Nations, when discussing gender equality, describes that the achievement of this goal will result in creating a “peaceful, prosperous, sustainable world,” which includes recognizing the full potential of all people to the betterment of the society or country. This definition is based in research. We know that a country’s treatment of women and girls serves as a strong indicator of that country’s wealth and stability, the population’s health, quality of life, and life expectancy, and the environment’s degradation.

In the book, The First Political Order: How Sex Shapes Governance and National Security Worldwide, they provide significant research and empirical evidence demonstrating how the persistent and systemic subordination of women has these wide-ranging implications our societies at large. Thus, we should consider gender equality as looking like the advanced health, happiness, and betterment of ALL people and societies.

Why is this goal now more important than ever as we strive to have a sustainable future?

These goals are incredibly important, now more than ever. Considering when they were named and adopted by United Nation members in 2015, they were seen as urgent and necessary to ensuring the safety and sustainability of all. Despite progress, in recent years, we have experienced many changes and current events that have created barriers to progress and change.

First and foremost, the COVID-19 pandemic has created a significant barrier. The World Economics Forum reported in July 2022 that the pandemic set the world back a full generation in achieving gender equality, and that it will take another 135.6 years to reach that goal. During the pandemic, rates of domestic and sexual violence increased significantly, especially given many victim survivors had to shelter-in-place with their abusers. Companies and organizations cut lower-paying jobs, largely held by women, and insecure, informal means of work also were reduced. It also created an additional strain on unpaid care and domestic work, which largely falls to women worldwide.

What are some of the greatest barriers toward gender equality?

The biggest gap or barrier to gender equality stems from a lack of education or knowledge of what gender equality entails, combined with a denial that gender inequality is still a problem. Looking around, students can see classmates as well as professionals, professors, deans, even our new president, all of whom may be a woman. As such, the visual or outward appearance may be that the historic inequities have been eliminated, as well as systemic barriers, resulting in a more even playing field.

However, that is not the case. One a way to visualize inequity and privilege is through a simple exercise, which I and others in the field of gender equity and violence prevention often lead. It was made most famous by Jackson Katz and entails asking men or masculine-presenting individuals to consider what they do to protect or prevent themselves from experiencing sexual violence on a daily basis and then asking the same question of women and feminine-presenting individuals. The list for men is generally small or non-existent, while the list for women is extensively long. During the exercise, I also engage the group in discussion and provide them with other skills to eliminate violence on campus. The list is a powerful visual that enables students to see in real time that one facet of gender inequality, risk of violence, is still very much real and present.

What is the relationship between gender equity and gender equality? 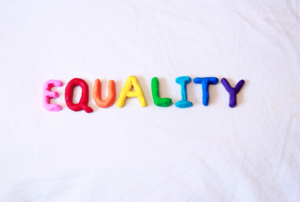 One of the biggest issues I often see is the conflation of equality and equity. I think most people agree with equality, the notion that men, women, and nonbinary individuals should have the same opportunities — in pursuing educational opportunities, professional careers, and other areas.  Equality is about giving everyone the same opportunities and focusing on outward discrimination. While this is very important and a major focus of diversity and inclusion efforts, we also need to get to gender equity.

Gender equity can be described as the fairness of treatment for women, men, and nonbinary individuals according to their respective needs. This means examining covert imbalances and requires us to explore our collective socialization and the historical wrongs that have led to gender inequity, disenfranchisement, and violence. Equity is all about promoting a culture change where gender is not constricted, and people are not questioned for their choices or ability based solely on their gender.

What are ways the Penn State Gender Equity Center is leading the charge toward this goal?

Penn State and our Center have been at the forefront of meeting this goal since the Center’s formation in 1985. Initially named the Center for Women Students, the Center focused on serving as an advocacy unit for female students around sexual harassment, classroom treatment, institutionalized sexism, sex-based discrimination, and other women’s issues. While still honoring the history of being the University’s historic women’s center, the Center changed its name in 2017 to be more inclusive, as it has served students of various gender identities and orientations.

Our vision is to create a campus culture where all students feel safe, supported, valued, and respected through access to a full range of services. We believe everyone deserves healthy relationships that are built on respect and consent, and should have positive experiences and learn life skills that enable them to be successful and achieve their goals at Penn State and in the world. We provide programming, education, awareness, and support about the issues most pressing and important to the student body. We discuss women’s history and rights, Title IX policy and activism, intersectionality, media literacy, body positivity, and sexual and reproductive justice concerns — through formalized workshops, events, guest speakers, and awareness campaigns. We also provide advocacy and crisis intervention services, a Traveling Advocate program, an online intake form for students to connect with us, and hybrid meeting options to best serve students’ needs.

Penn State and our Center are also leaders in peer education and prevention programming, with the goal of eliminating all forms of oppression that contribute to the perpetration and continuation of violence. We recently received grant funding to launch the campaign, “It’s On Us Penn State” which consists of messaging, outreach, and peer-led educational workshops delivered through innovative intersectional programming. We provided 275 classroom and formalized presentations to over 8,600 Penn State community members, and 45 awareness programs, events, and keynote speakers reaching over 5,600 students, faculty, and staff.

In the policy and systemic advocacy realm, we reconvened the Coalition to Address Relationship and Sexual Violence (CARSV) with regular meetings, the addition of faculty, staff, and students, and a subcommittee dedicated to working on sexual misconduct issues. Our staff also joined the President’s Commission for Women, creating a subcommittee on Violence Prevention and Awareness, to research and analyze the current offerings of prevention education as well as advocacy and support for victim survivors.

What can individuals do (at Penn State, in the U.S., around the world) to help in this mission?

At Penn State, students can get involved in multiple ways:

If you’d like to learn more and support the Penn State Gender Equity Center, follow them on Instagram and Facebook. Stay tuned for the Center’s Domestic Violence Awareness month programming and Love Your Body Week programming taking place in October. If you’d like to join the organization’s listserv, email Becca at rxg5421@psu.edu.